October 2017 was VOSH-Minnesota’s 5th trip to Tanzania, and our 2nd trip to Marangu, on the slopes of Kilimanjaro. Our team consisted of 40 people, including 6 optometrists, 2 ophthalmologists, 11 VOSH rookies, and the rest we hard working VOSH veterans. Marangu is at an altitude of 5,000 feet, and the home of the Ngaruma Lutheran Parish, our hosts, and the Marungu Hospital, which is supported by the church.

Tanzania requires visas of all travelers from the United States, and we always get tourist visas as they are less expensive and easier to obtain. One week before we were to leave, our hosts said we needed business visas, costing $250 apiece, in addition to the $100 we already had spent on our tourist visas. I tried to explain to them that we were not going to conduct business, I even quoted the definition of “business” from Merriam-Webster’s dictionary, and assured them we were not going to conduct business. They insisted and we spend 2 hours at the airport upon arrival in Tanzania getting the required visas. Then it was time to collect our boxes of glasses, luggage, and equipment. Another hassle!! The head of customs insisted upon me providing for him an “official” letter of invitation from our hosts. I had told our hosts about 6 months before we left that we needed this, but since they didn’t provide it for us, customs was not going to release our glasses and equipment. I tried to convince him of the importance of these glasses and the help they would provide to the poor of Tanzania, but he didn’t care. Then I had to switch gears. Having run into this situation before in other countries and once before in Tanzania, I knew there was a way to get our glasses through without any letter. BRIBERY!!!. After demanding we pay $300, and having only $270 on me, he let us take our stuff and be on our way. By this time it was getting late and we were tired.

At breakfast the next morning we were met by hospital officials who told our they didn’t think we would be able to work. I told them we got the business visas as they had demanded and they still said they didn’t think it would be possible because things had changed in Tanzania, and they had a new president just like we had in the United States. A group of us then went to the hospital to talk to the head of the hospital and plead our case. He showed us a letter telling us that we would not be allowed to work and foreign doctors were not as welcome as they once were. He suggest we talk to the regional health director in Moshi, and town about 45 minutes away. So our group loaded up in a land rover and we to see him. The hospital director and the regional health directors conversed in Swahili and we couldn’t tell what they were saying, but it didn’t feel like it was going to work out for us. Finally they came to a conclusion that we could work at the hospital, but not as volunteers, but as employees of the hospital. The hospital would charge fees, and would bill insurance when appropriate. I thought this was a little strange, but accepted the plan. We were also told we couldn’t take pictures while we worked because they didn’t want pictures to show up on social media or other means, as we were not really supposed to be working there.

So, our works started as planned. We had worked in this same venue a few years before, so it didn’t take long to get set up. They had lined up translators for us, and before we began working, the translators came to me and asked what they would be paid. Last time we paid them about $2 an hour and everyone was happy. This time they demanded $100 per day apiece. I told them they could leave, we’d do fine without them. I didn’t know if they had unionized since our last visit or what. Then 2 of them came back, really nice people, and said they would work for $20 a day, which in Marangu was really good money. They arranged for others to work at the same pay scale, and we were fine.

Our work was pretty much uneventful. We had ample room to work and the patient flow well organized for the most part. We had planned to see 500 patients per day and we ended up seeing close to 2,000 in 3 days of work. Our major problem was our autorefractors didn’t work well, as we couldn’t keep any batteries charged. Thanks to some “engineers” in our group, we were able to get them wired to make them last to get our work done. We had delicious meals at lunch. We stayed at the Marangu Hotel in cottages, and many of us had a beautiful view of Mt. Kilimanjaro right out our front window. The food there was plentiful and the beverages were cold!

After our work, our team traveled to several of Tanzania’s game parks and we had a wonderful safari. It was a great trip, great people, and lots of wonderful memories. 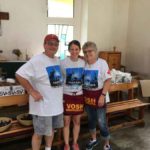 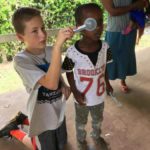 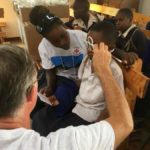 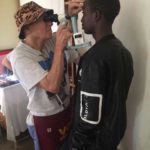 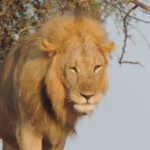 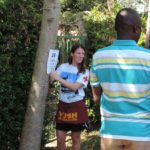 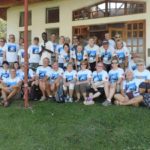